Thanksgiving, a trip to CT and NYC!

What a fantastic weekend! We spent Thanksgiving with friends in CT and it was a great break away! The highlight of the trip was of course giving thanks! We also went to NYC and managed to squeeze in the American Museum of Natural History, delicious lunch in Chinatown at Wing Wong's , a little shopping, a trip to FAO Shwartz and then dinner at a delicious Mexican restaurant Dos Caminos. I must say that I do miss city living!

Back to life in Vermont! I am having a Broker Open House this Tuesday from 11.30 - 2pm at 161 Austin Drive, Burlington, Unit 7. Please feel free to drop by!

Posted by Stella Abraham at 2:25 PM No comments:

Posted by Stella Abraham at 9:10 PM No comments:

"The mortgage industry received some big news this morning that will likely overshadow the Gross Domestic Product and Consumer Confidence reports today.
One of the biggest news items is the Fed's announcement that it will purchase $600 Billion worth of Mortgage-Backed Securities backed by Fannie Mae, Freddie Mac, and Ginnie Mae. This should help increase the availability of credit, while also lowering fixed mortgage rates. In addition, the Fed will allocate $200 Billion to create liquidity in the auto, student, and small business loan markets.
News of these plans is already helping push mortgage rates lower, as Mortgage Bonds have had a strong rally and appear headed for their price highs of 2008

BUY, BUY, BUY - especially if you live in Burlington where rental prices are not low!

Posted by Stella Abraham at 9:42 AM No comments:

First Day on the Mountain!

It was opening weekend at Stowe Mountain Resort this weekend. We decided that as it was going to be the terrain that Callum would probably not have much initial confidence, we decided to wait until after Thanksgiving when the rest of the mountain opens.

Euan and I went this morning for our first runs and it does feel so good to get out there. It was not that cold today and the view was spectacular. Amazing how you get oblivious to the beautiful scenery by the end of the season!

So we had a few runs and had our usual lunchtime special at Piecasso!

Then back to work, Euan loving what he does and I, even in this market, loving what I do!

I have a new listing - details to come tomorrow!

Posted by Stella Abraham at 5:28 PM No comments:

A little tooting my own horn – but this year in particular I have a lot to be thankful for…...thank you

Let's be honest it has been a tough year to get back in to the business of Real Estate.

With recently relocating to Burlington, not knowing a lot of people and the downturn in the economic market, I am often confronted with the question "Why did you get back in to this career now?"

I just want to say that I thoroughly enjoy selling and buying property. I absolutely love what I do in the hard times and the good times. I believe that if you work hard, stay positive and persevere then success will come.

I have been recognised for the 3rd time as a Top Realtor of the Month at Coldwell Banker Hickok and Boardman. I feel privileged to be awarded this title with Realtors Geri Reilly, Debby Hanley and Nancy Desany. All of these women are extremely successful agents who have been in the business for years.

Thank you to all of my past and present clients, the team at Coldwell Banker Hickok and Boardman, my new Vermont friends who have used me as a Realtor or recommended me to others. Most importantly I want to thank Euan and Callum who have stuck by me and supported the late night phone calls and commitment to others!

There are superb floor to ceiling windows with views on to the woods which give you the feeling of living in serenity.

There are two bedrooms, two bathrooms, and a study area. An enclosed porch as well as a deck to relax and take in this natural setting in an extremely convenient location.

Posted by Stella Abraham at 11:08 AM No comments:

I was recently sent this CNN link by an old school friend from Facebook who is probably still chuckling about the fact that after all those years of growing up in Hong Kong, I now live in Vermont!

So Burlington and it's 40,000 residents enjoy the healthiest of environments. Still no Target though! That would make me feel a lot healthier!

Posted by Stella Abraham at 8:36 AM No comments:

6 degrees of seperation - what a small world?!

When I first bought a house in Essex, Vermont, I knew that one of the advantages to moving to Vermont would be the upbringing it would offer Callum as a child. He would be able to bike to the local Founders Middle school, bike to the Sandhill pool, snowboard at Stowe and Bolton all winter and even have a regular ice cream van drive past his house all summer.

The first summer we moved here we waited with baited breath to hear the music of the ice cream van...it arrived. The smile on Callum's little face was indescribable! You could see that he was thinking 'A van brings me some ice cream once a week!?'

One day when we were buying ice cream the lady noticed that Callum was wearing a Liverpool football shirt. She told us that she had a 2nd cousin that lived in Liverpool. That night I giggled with Euan about how even in a small state like Vermont people claim to have long lost relatives back in England.

About 2 months ago I received a phone call from one of my very best friends Diane who used to live in San Francisco whilst we were there. She now lived in England and said that she would be coming to visit. She did say that she was also coming for a family wedding but that we would get to hang out a lot and it would be good for me as I wasn't from here for me to meet some more people.

So she arrived last week and I was introduced to her family that were having the wedding who also live here in Chittenden County. We all went out one night and one of the relatives walks up to me and says "Stella, do you remember me?" I racked my brain for a while, in this business I am pretty good with remembering people but also do meet a lot of folk at Open Houses. Then she told me that she was the lady who had the ice cream van. "Do you remember I told you I had cousins in Liverpool?" That smile on Callum's face and even the giggling about the claim that everyone has a long lost cousin from England with Euan came back to me. She then tells me that in fact Diane, my best friend from California is the cousin she was talking about.

Wow - what a small world. Lessons learnt? That even in a small state like Vermont the theory of 6 degrees of separation can often be blown out of the water! And next time somebody says that they have a cousin from England. I will be asking their name........I might very well know them!

Posted by Stella Abraham at 8:02 AM No comments:

A beautiful house with beautiful gardens reminded me of Britain! 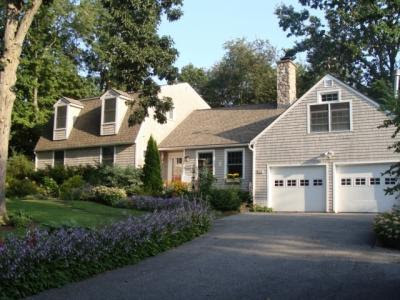 The sellers have recently reduced the price to $595,000

My colleague Debbie Hanley has listed this home.

It was recently featured on the Flynn House and Garden Tour, and once you walk around, you'll see why.
The completely refurbished interior and open spaces make this home warmth, full of character and style.

The neighborhood offers swimming on the western side of Shelburne Point & a mooring area in Shelburne Bay and there is also have a community tennis court.

If you or someone you may know would be interested in this property then please let me know.

Posted by Stella Abraham at 11:13 AM No comments:

Stella Featured In A Video For Seven Days

I am featured in a video created by Seven Days for a promotion between Seven Days and Hickok and Boardman. Click here for more details.

"Find out everything you need to know before buying a home — from loan pre-approval to closing."

I am going to be a special guest speaker in a home buying seminar hosted by Seven Days. The seminar will be held at 6-8pm on Thursday November 6th at the Echo Center.

The Power of Positive Thinking

I had an extremely busy Broker Open House at my new listing at 26 Oak Creek Drive, South Burlington. I switched it up a little and served Dim Sum for lunch. It was a good choice as over 35 Realtors came! That is some brilliant exposure for the house. The Realtors had some great feedback and it is always nice to see familiar faces. Thanks you for coming everybody!

With all the success today though, I think the highlight of my day was the chat I had with my 5 year old little boy Callum when I picked him up this evening.

As usual, I asked how his day was and he said "it was good" - standard answer! We then had a chat about tomorrow and the fact that there was half day at school and that he would be going to a friend's for a play date in the afternoon. He said that he knew that as his teacher was telling him why there was only half day tmorrow. He proceeded to tell me that his teacher was going to choose the 'Captain of America' tomorrow. I had to smile! I told him that it was an election and that his teacher would be voting.

His closing comment was "I know, I want Mr Marino (his principal) to be the Captain of America"

The New York Times to be precise!

A good little write up about things to do in Burlington and they have highlighted some great places!

There is even a photo of my friend Rachel who owns Sweet Lady Jane - take a look at the slideshow.

Thanks to all who donated!